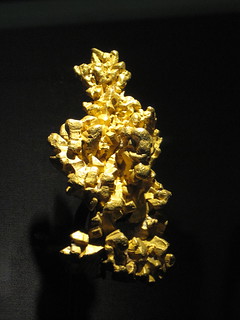 According to a new study in Nature Geoscience, earthquakes turn fluid-filled rock fractures in the earth’s surface called faults into potentially bountiful gold deposits—once again proving that there is no greater alchemist than Mother Nature herself.

It is well-known that much of the world’s gold has been found in quartz veins that formed during periods of mountain-building as long as 3 billion years ago. So what is the connection between these fluid-filled ruptures in the earth, seismic activity, and gold production?

About 6 miles underneath the surface, the water filling these faults is kept at incredible temperatures and pressures and carries high concentrations of carbon dioxide, silica (which forms quartz), and a range of trace elements, including gold. When an earthquake hits, it moves along these ruptures and widens them. This expansion in the volume of the fracture causes an abrupt decrease in fluid pressure.

Compare it to suddenly releasing an ancient pressure cooker—the drop in pressure causes the water in the void to instantly flash into steam, thereby forcing the silica and gold out of the fluids and onto nearby surfaces. This process is called flash vaporization.

Thus, the gold in the fluid changes from its soluble state into concentrated deposits. Since underground fluids contain at most one part per million of the element, the amount of gold produced from a single earthquake is infinitesimal. However, recurrent earthquakes in the same area can eventually build up a significant concentration of gold and lead to economically viable deposits over time. This also explains the link between huge gold deposits and ancient faults.

The study may explain the mechanical foundation for the formation of up to 80% of the world’s gold deposits, and it also helps pave the way for future gold-exploration efforts. By now, most easily accessible gold deposits near the surface have already been exploited, and geologists are saying it’s time to start exploring deeper parts of the earth’s crust.

“When we know what forms a deposit, we can go looking for ancillary tell-tale signs of where those kinds of mechanisms may have been occurring both in the recent past and through geological time,” says Dr. Dion Weatherley, lead author of the study.

If there is gold hiding in the deep recesses of your closets and drawers, make like an earthquake and bring it to the surface! You can get top dollar for all your unwanted gold jewelry, coins, and watches at Cash for Gold USA. To find out how easy the process actually is, visit CashForGoldUSA.com today.