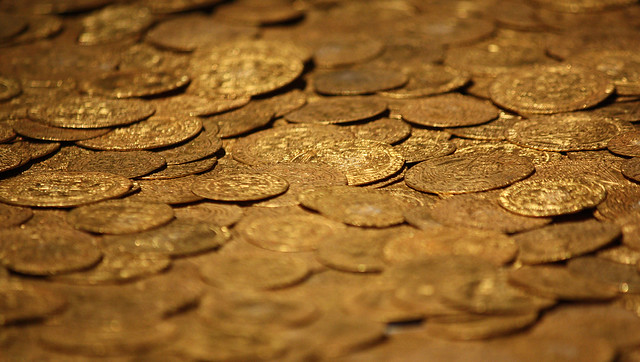 A family of treasure hunters recently uncovered a literal gold mine, discovering $350,000 worth of gold in a sunken Spanish ship off the coast of Florida.

It is the stuff of pirate movies and buried-treasure legends come true–after decades of scouring the “Treasure Coast,” the Schmitt family had become accustomed to mostly uncovering the usual sea junk: trash, beer cans, and the like. While they have indeed made a few notable discoveries in the past, including a three-centuries-old silver platter worth $25,000 in 2002–already an impressive find on its own–this time they really hit the mother lode.

It had started with a single gold coin, worth $30,000, found on Labor Day weekend by Booty Salvage diving crew member Dale Zeak. It was Eric Schmitt, also part of the treasure diving crew and son of Rick Schmitt, founder of the Booty Salvage company, who retrieved the rest.

Eric Schmitt told WPTV5 that the gold was found approximately 1,000 feet off the coast of Fort Pierce. The spoils consisted of eight gold chains, a gold ring, and five gold coins dating back to 1700s Peru. “It was a lot of emotion,” said Schmitt. “The first was excitement followed by a lot of almost crying.”

The treasure in question is likely from a fleet of 11 Spanish ships that was destroyed by a hurricane on a return voyage to Cuba in 1715. The state of Florida has a claim to 20% of this historical treasure for museum display, but the rest will be split between the Schmitt family and the company that holds local diving rights.

Send Your Buried Treasures to Cash for Gold USA

While it may not match up to the Schmitts’s enormous find, there may be golden treasures hidden away in your closets and drawers that could be worth a lot! Sell your unwanted gold jewelry, coins, and watches to Cash for Gold USA and get top dollar in return. To find out how easy the process is, fill out our short form to request a free shipping label today.